Homeopathic medicines work wonders in all types of hair fall and especially in cases of premature loss of hair and Alopecia Areata.

The case photos shown here are of a 10 year old child with Alopecia Areata of the scalp who recovered in just 3 months. No relapses have been reported since being last treated in Sept, 2008. 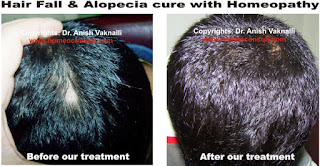 What is Alopecia Areata:
Alopecia Areata is an autoimmune skin disease resulting in the loss of hair from the scalp and elsewhere on the body. The person's own immune system attacks the hair follicles, resulting in round, smooth bald patches. A person with a family history of autoimmune diseases is prone to develop this condition.

This condition can progress to complete scalp hair loss (alopecia totalis) and/or complete body hair loss (alopecia universalis). Over 5 million people in the United States suffer from this condition. Alopecia Areata occurs in males and females of all ages and races. Its unexpected onset, recurrent episodes, and erratic course have a devastating effect on the lives of those affected.

The general approach of suppressing the autoimmune response with local cortisone creams (steroid) may work temporarily and is limited to the patch only. Relapses are common and the course still remains unpredictable. It has no long-term advantages and does not alter the nature of the disease.

Why Homeopathy from HomeoConsult RD?

Homeopathy, on the other hand, addresses the compromised immune response, family history or genetic predisposition, nature and intensity of the disease as well as inherent factors which influence this condition.It does not consider Alopecia as an external disorder. Treating it locally will usually prove futile and temporary.

Cases treated by Dr. Vaknalli have shown to respond as below
( Over 25 years of clinical obersavations )

Though we consider Alopecia Areata a stubborn and difficult condition to treat, individuals have a better long term prognosis on completion of our Homeopathic treatment.

For information on Male and Female Pattern Baldness
Posted by homeoconsult at 2:08 PM 2 comments:

Homeopathic treatment a must for children with ADHD, ADD, Autism, Mental retardation and Behavioral disorders.
﻿﻿﻿﻿

ADHD or ‘Attention Deficit Hyperactivity Disorder’, a behavioral disorder in children, is characterized by inability to focus or pay attention due to hyperactivity over a longer duration of time. This impairs the child academically as well as his/her social adaptability. Genetics and numerous environmental factors are considered as the most probable cause of the disorder.

Autistic kids find it difficult to communicate and express themselves using words. They tend to keep to themselves, reacting abnormally to their surroundings, express sensitivity to normal sounds and touch, and have trouble linking words to their meanings (therefore learn better by using picture) as well as their inability to understand or comprehend feelings expressed by others. A child with autism tends to repeat certain words, have temper tantrums and/or flap their hands.


For Live accounts and experiences of parents whose kids with Autism are treated at HomeoConsult RD by Dr. Anish Vaknalli, please click here

Master A was diagnosed with moderate ADHD with speech delay. He typically lacked concentration and learning ability, did not recite or repeat anything that was taught and was restless. In this video you can see a significant improvement in not only his sitting tolerance, he has significantly excelled in his academics.

Management of ADHD and behavioral problems involves administration of a series of homeopathic remedies depending on the behavioral pattern the child presents with.This approach, known as the ‘Constitutional Homeopathic approach’, involves a deeper understanding of the unique qualities and personality traits of the child such as:

The child’s feelings and emotions  |  His fears and insecurities
His behavior and personality traits  |  His likes, dislikes, habits and response
Sleep patterns and dreams  |  Each and every physical condition

In order to derive these details we have designed a unique method by which we successfully treat children irrespective of whether they see us in person or not or are overseas.

Homeopathic medicines prescribed after evaluating these details help in correcting or normalizing such personality aberrations without any side effects. They can be administered over a longer duration of time unlike most allopathic or conventional medicines used for such conditions.

Safety and Efficacy: Homeopathic remedies in general have no known side effects whatsoever.  They are recommended for all age groups and can be taken for long durations without the fear of any harmful side effects. You can be 100% sure of their safety and efficacy.
Case management example:﻿﻿

﻿﻿A child (age 6 years) living in the United States was prescribed a set of homeopathic remedies (Aco. Nap, Ignatia, Stramonium) to be administered at different stages. ‘Aco. Nap’ was a drug strongly indicated when the child presented with sudden panic attacks and was unable to control his emotions; ‘Ignatia’ helped strongly when the child was depressed and unresponsive, and ‘Stramonium’ helped when the child was violent and had numerous fears resulting in lack of confidence.

Most cases of ADHD, Autism and behavioral problems are managed using this method and our general observation is that prolonged Homeopathic treatment does help in primarily preventing or normalizing sudden emotional outbursts, hyperactivity, vulnerability and depression, considerably. This in turn improves the child’s attention and memory retention span (ADHD) and his/her ability to cope with everyday activities better.

If your child or someone you know suffers from behavioral disorders, Autism or ADHD, homeopathic treatment for a period of 6-12 months should definitely be considered. The medicines have no side effects or adverse reactions and can be taken indefinitely and as the condition demands.

Real Case 2: Testimonial from a parent


Real Case 3: Testimonial from a parent

Dear Dr. Anish Vaknalli, this is regarding my nephew Shiv.... On 9th August 2011 we received the homeopathic medicine sent through you as per our order no.477. We started giving the medicine as suggested by you from 10th August 2011 onwards.

Shiv... has been attending ‘Play group’ at ‘Kid..’ since 4th July 2011. He enjoys going to school. He also has been getting ‘Behavioral Therapy’ from 26th June 2011. Since last few days we have observed that his vocabulary has increased. He repeats a new word as soon as he hears it or even repeats words, when asked to for eg. Zoo, Circus, Cake, Ice-Cream, Auto, Nal (tap), Joker, Kitchen, Lucknow, etc.  Now he enjoys watching his surroundings and points out to cow, horse, scooter, rickshaw and other objects which he sees on the road or in a magazine or even on T.V.  He recognizes alphabets and numbers. He picks up any magazine or newspaper and at random points out individual alphabets (A-Z) and also numbers ( 1-10). He takes interest in solving puzzles, recognizing pictures of fruits, animals, vegetables, recognizing colours and shapes.

He is now more obedient during ‘work-time’ both at home and during the ‘Behavioral Therapy’. However, since last one week he looks into the eyes of the ‘Behavioral Therapist’ or rather has a proper eye contact with her, when she asks him to repeat words after her. Of course, to make him look into her eyes she holds his chin and makes him listen to a sentence or a phrase, so that he can repeat the same. Now he tries to combine two or three words. Now he does not throw tantrums when asked to repeat a phrase or a sentence.  When he is in a good mood he does recite full nursery rhymes - ‘Twinkle Twinkle Little Star’, ‘JohnyJohny Yes Papa’ and the song ‘ChandaHaiTu, MeraSurajHaiTu’. He continues to jump while watching ‘commercials’ as though ‘springs’ are attached to his feet. Now he can recognize his relatives and says their names MaaluDidi, Jijaji, ( Brother-in-law) Tauji (Uncle)  Taayiji
( Aunty) Buaji, ( Aunty) Phuphaji, (Uncle)   Chun-MunDidi. Now he has started enjoying his baths. He does not make fuss while taking medicines.

I look forward to your guidance in this matter. Kindly let us know as to when we should get in touch with you, after this.


Real Case 4: Testimonial from a parent

A case of Congenital CMV leading to Mental Retardation and ADHD traits:
My daughter was prematurely born. 3 months after birth she suffered symptoms of CMV infection but unfortunately was not diagnosed for nearly 6 months.  In this period doctors injected here with a lot of general antibiotics following which she was transferred to Jaslok hospital where her treatment for CMV began.

As a result of this condition we found her speech and her motor skills were delayed. We consulted a psychiatrist, neurologist and what not. We were very worried for her speech and motor function delay.

One day we watched an interview on Autism and ADHD and Homeopathy by luck. Though my daughter was not diagnosed with ADHD or Autism we knew that homeopathy was very good for conditions with symptoms like them. I went through Dr. Anish Vaknalli’s website and happened to consult him soon after. I am now taking medicines for 2 years for my daughter and during this period she has improved a lot. On starting treatment she started talking, became much calmer and started to focus and concentrate which was absent before. She was very scared of loud voices like crackers, lightening etc. and now she is very much better.

I am very grateful to Dr. Anish Vaknalli and our treatment is still on.
Best Regards, Parent of Miss...(Case no: 998, Name undisclosed on request of Parent)

You can order your medicines worldwide at the link below.

Owing to the successes we’ve made in the past decade in the treatment of ADHD, ADD (Attention Deficit / Hyper active disorder) and behavioral problems in collaboration with therapist and special schools, we strongly recommend Homeopathic treatment for this condition.

Your child’s condition can be significantly improved, if not completely reversed, making your child ready to cope with the worldly challenges.

For any further details or clarification do feel free to email us at ask@homeoconsult.com

Opt for an assured, safe and promising line of treatment for Molluscum Contagiosum...

Molluscum Contagiosum: What are they? 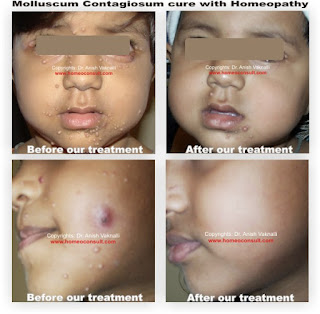 Molluscum affects all age groups and is commonly seen in children and individuals having a lowered immunity. They tend to spread by contact and a person may have multiple Molluscum due to spread of the caseous matter within the Molluscum.

In adults, Molluscum contagiosum are usually seen on the genitals as MCV is also sexually transmitted. Early genital lesions may be mistaken for Genital Herpes, but unlike herpes, Molluscum is usually painless.

The Homeopathic Treatment offered at HomeoConsult RD works wonders in curing and preventing spread of this ailment, without any side effects.

There are numerous remedies in homeopathy which help in curing Molluscum. If the wrong remedy is chosen the Molluscum may spread and may take longer to respond. It is empirical that we study each and every case differently and take into consideration the nature and severity of the condition and your body’s immune status.

After considering these factors the indicated Homeopathic remedy is prescribed for a period of 3-4 months. This duration is usually sufficient to contain the virus and a further course of 3-4 months can permanently eliminate this condition.

Also, on completion of the treatment you will have minimized the chance of a reoccurrence, evident from the thousands of cases treated at the centres.

(Note: The duration of treatment can be as short as 3 months or may sometimes continue for 6-9 months, depending on the severity of the condition and its location)

http://www.homeoconsult.com/cured-cases/cured-cases.aspx
You can view some cured cases here.